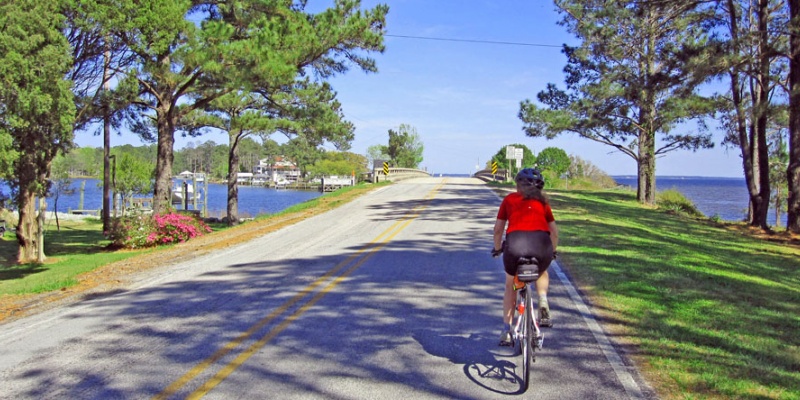 Sparkling sandy beaches, delectable seafood, relaxing ferry rides, and extraordinary biking await you on this special tour.  We visit in the spring and fall, when the crowds are gone and the weather is perfect for bicycling. The famous picturesque lighthouses of the North Carolina seashore complete our adventure in the historic islands haunted by Blackbeard’s legend!

Designed for flexibility, our routes offer 15 - 50+ miles each day (at your option).  Stronger cyclists may bike over 50 miles on each day of the tour, including up to 75 on one day.  Less ambitious cyclists take advantage of short cuts and "leap frog" van shuttles along the route to tailor the route to their needs.  Because the route distance options are so flexible, this is one of the best tours for bicycling companions of differing riding styles.

The terrain is flat, making it accessible to all ability levels.  Strong coastal winds sometimes present a minor challenge, but they are just as likely to propel us along our route!  Several ferry rides are scattered throughout this tour, allowing pleasant opportunities to relax.  Along the way, observe coastal wetlands as you bike through the Cedar Island National Wildlife Refuge and Ocracoke Island.

Also check out our 4-day version of this tour, and our 5-day Northern Outer Banks Tour. 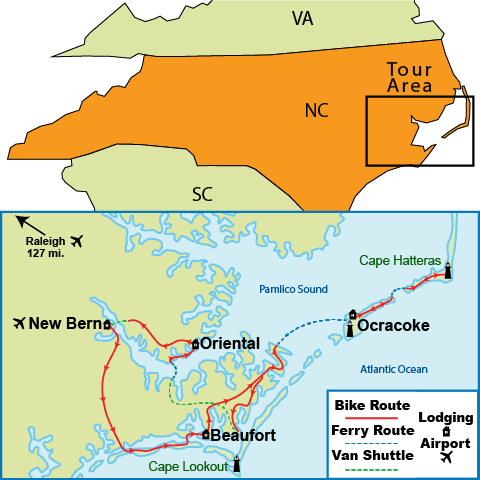 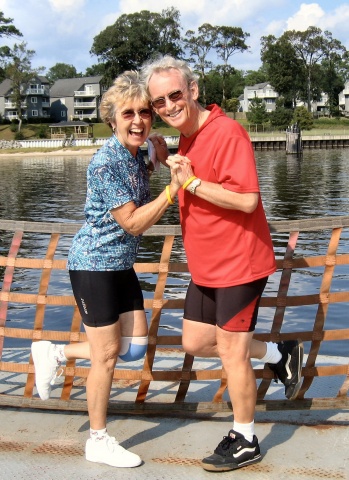 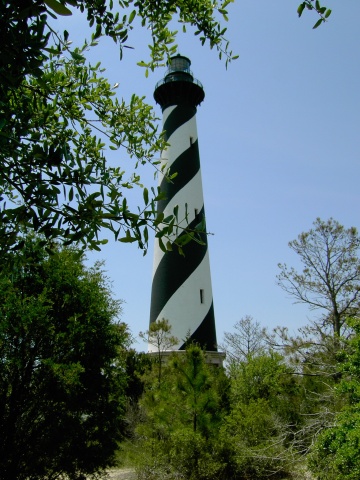 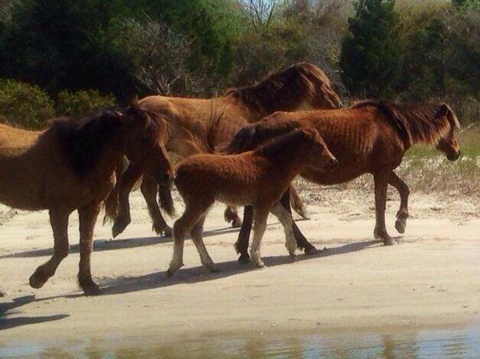 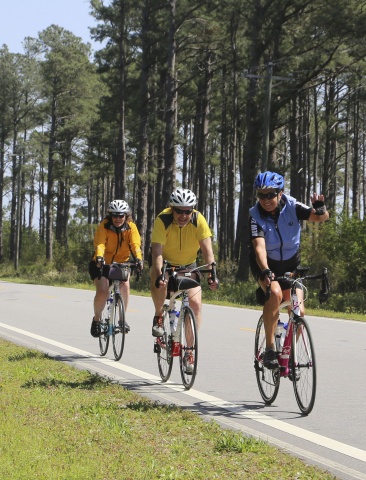 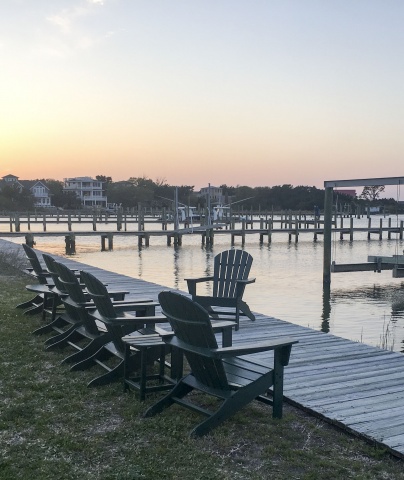 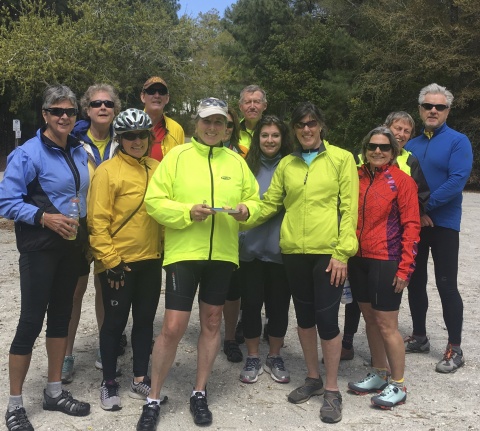 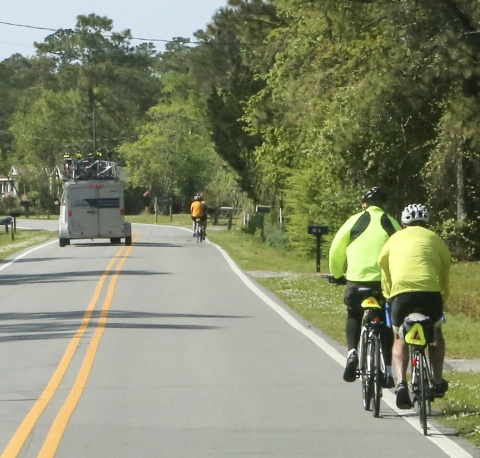 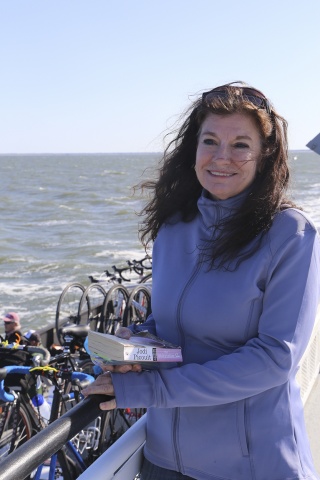 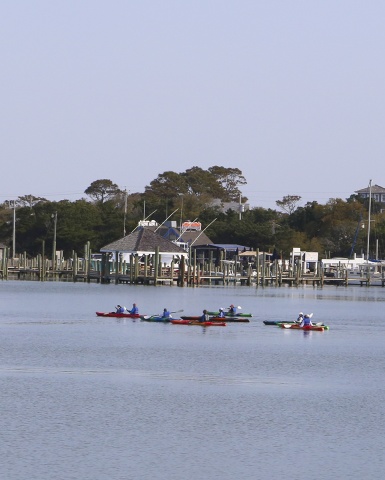 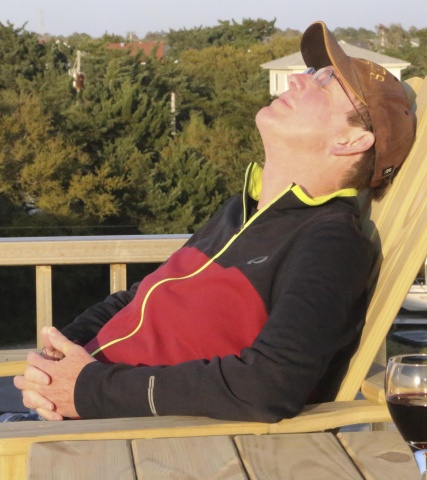 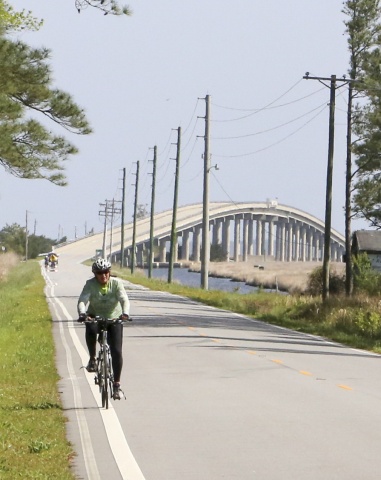 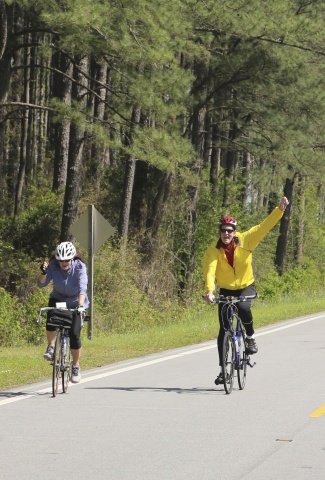 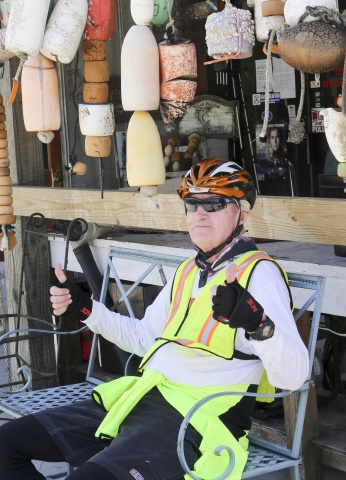 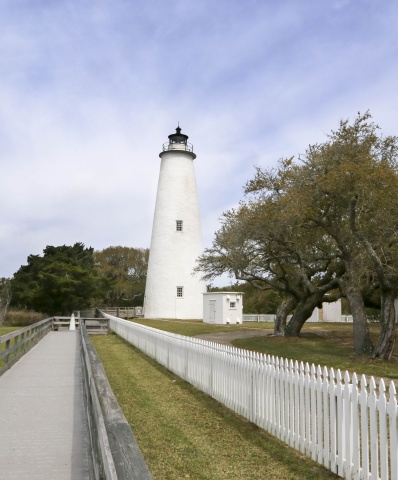 Photos from this Tour
Thanks for an enjoyable vacation. Your attentiveness to the details made us feel special and pleasantly pampered. It was great to not have to think about any meal, any snack or drink along the way, admission fees, sun screen, bug spray, etc. You provided it all. We relaxed and enjoyed the week.
Jim from Goshen, IN

We meet in New Bern, North Carolina's second oldest town, at the Courtyard New Bern Riverfront, a waterfront hotel in the heart of the historic district.  Arrive early to tour Tryon Palace, the colonial governor's mansion just a few blocks away.  At 3:00, we will take a casual bike tour of the historic downtown, led by your guides.  New Bern's history dates to the late seventeenth century, and it has stories to tell!  We'll have an orientation meeting over wine and cheese prior to walking a few blocks to dinner at one of New Bern's finest restaurants.

Biking away from New Bern, we make our way south toward the ocean. We will pass fields of cotton, soybeans, and tobacco. Our catered picnic lunch will be enjoyed in a lovely waterfront setting, after which you may bike east on Bogue Banks, or shuttle ahead to Beaufort in the van. Optional activities in Beaufort include walking the fascinating 18th century historic district.  Lodging is The Inlet Inn, and dinner will be at the wonderful Beaufort Grocery Company, which has earned a loyal following.

After a full hot breakfast, we embark on bike ride taking us through the breathtaking salt marsh expanse of the Cedar Island Wildlife Refuge and past tiny coastal fishing communities to the first ferry of the tour.  This 2 hour trip transports us across sparkling Pamlico Sound, providing time to enjoy a delicious catered lunch.  We land in the quirky fishing village of Ocracoke with time to explore the village on bike and walk the sandy side streets, shop artists' shops which line the village roads, or relax by the heated pool at the inn.  Later, we'll recap the day’s adventures over wine and cheese on the rooftop widow's walk at the Castle, prior to walking to our favorite Ocracoke restaurant for another gourmet dinner.

Multiple activities will keep you on the move today.  Enjoy an early beach walk before breakfast, or sleep in as you see fit.  After a spectacular breakfast at the Castle on Silver Lake, we take a guided kayak tour on beautiful Silver Lake Harbor and nearby creeks on the island.  Later, you'll have time to bike to the north end of Ocracoke Island and back, paying a visit to the wild ponies of Ocracoke Island along the way.  The evening is yours to enjoy at any of the numerous restaurants on your own, including Howard's  Pub, boasting great food, over 200 beers, and the island's only raw bar 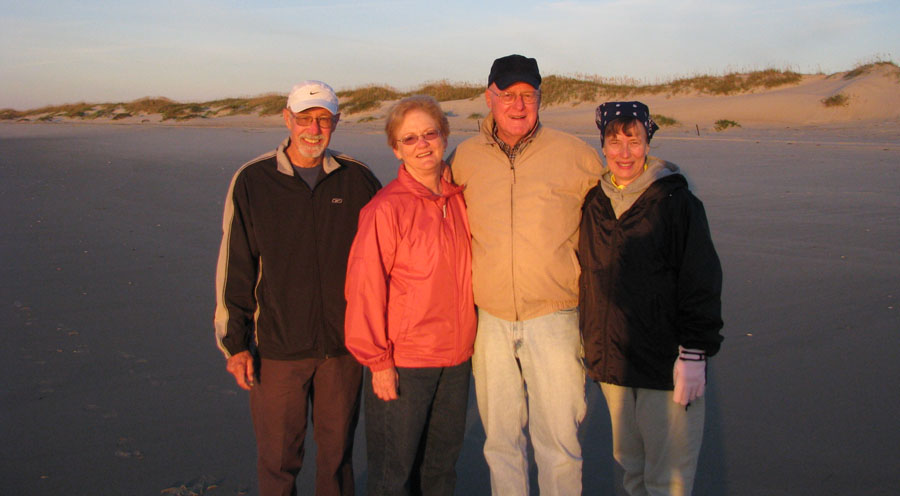 Rising early, we will catch the first ferry back to the mainland, on which we will have a catered breakfast. Landing in Cedar Island we will bike southeast, back across the numerous salt marshes.  Lunch will be enjoyed at a picturesque spot overlooking the water.  We'll shuttle briefly from there to the 15 minute ferry across the Neuse River.  Upon landing on the north side of the river, we will resume biking, pedaling on into the town of Oriental.  Explore this quircky little town on foot or relax at River Neuse Suites, our final lodging.

We'll bike away Oriental, and across the bridge with a beautiful last view of the marina.  As we continue bicycling west, waterfront views give way to farmland and forest as we get closer to New Bern.  We'll arrive around lunchtime. One final catered lunch together and showers are provided prior to departure.

What's Included in Your Tour Price

Dinner on Nights 1, 2, 3 & 5; All lunches except 1 on your own lunch; All breakfasts; snacks; and hors d'oeuvres most nights.

Carolina Tailwinds maintains a guest to guide maximum ratio of 7:1 on all our tours.  Guides are ready to show you the hidden wonders of each and every destination.

Service of 1 – 2 support vans on route every day.

Carolina Tailwinds picks up EARLY on the morning of Day 1 in the Raleigh area and drops off in the late afternoon on Day 6 at the Raleigh Durham Airport area or airport inn locations to and from our tour start in New Bern, NC.  Timing formally coordinated 2 weeks prior to tour date.

Courtyard New Bern Riverfront, New Bern, NC. Your balcony overlooks the Neuse River in the heart of New Bern's historic district.  Modern and up to date, this hotel offers a pool, fitness center, The Bistro restaurant and bar, and a business center.

Inlet Inn, Beaufort, NC.   Walking distance from everything in the heart of the historic district, the Inlet Inn boasts large balconies with the best views of the Beaufort waterfront, and spacious rooms.

The Castle on Silver Lake, Ocracoke, NC.  You will not want to leave the island hospitality provided by this beautifully restored bed and breakfast!  Relax with friends by the private heated pool, on the widow's walk, or in the parlor complete with billiards table.

River Neuse Suites, Oriental, NC.  Enjoy your last night sharing a brand new luxury condominium with your new friends.  In downtown Oriental, all units overlook the picturesque Neuse River and each has a spacious balcony.  Walking distance to shops and marinas in this laid-back village.

Designed for flexibility, our routes offer 15 - 50+ miles each day (at your option).  Stronger cyclists may bike over 50 miles on each day of the tour, including up to 75 on one day.  Less ambitious cyclists take advantage of short cuts and "leap frog" van shuttles along the route to tailor the route to their needs.  Because the route distance options are so flexible, this is one of the best tours for bicycling companions of differing riding styles.

The terrain is flat, making it accessible to all ability levels.  Strong coastal winds sometimes present a minor challenge, but they are just as likely to propel us along our route!  Several ferry rides are scattered throughout this tour, allowing pleasant opportunities to relax.  Along the way, observe coastal wetlands as you bike through the Cedar Island National Wildlife Refuge and Ocracoke Island.

Getting to the Tour Start (New Bern, NC)

Raleigh-Durham Airport (RDU) is approximately 2-1/2 hours away.  It is served by most major airlines.

Wilmington International Airport (ILM) is approximately 2 hours away.  Service provided by US Airways and Delta.

Ground Transit: Rental cars are available at the Jacksonville, Raleigh-Durham, & Wilmington, NC airports.  A complimentary Carolina Tailwinds shuttle will be available to and from the Raleigh-Durham airport at a designated time on the morning of Day 1 and on Day 6 after the tour concludes.

Parking: We have arranged for complimentary long term parking for the duration of your tour.  We will end the tour at the same inn with an opportunity to shower there prior to departure.

Try to arrive no later than 2:00 p.m., or 1:30 if you are renting a bike from us.  That means an EARLY morning or day prior arrival at RDU, and a morning or early afternoon arrival at EWN.   Departure time from New Bern on the last day is between 1-2 p.m. and return flights should be no earlier than 3 p.m. from EWN and 7 p.m. that evening from RDU.

After our activity packed tour, you may want to relax for a few days.  Perhaps in the historic district of Wilmington.  Or continue your visit of the coast by driving up to Manteo and Kitty Hawk.  There is plenty to see and do in eastern North Carolina.  We'll be happy to make suggestions for you and help with arrangements.

The New Bern Area:   There is a lot to do in and around New Bern if you have time.  Tryon Palace, the meticulously reconstructed and furnished colonial era capitol and governors mansion provides a fascinating look back in time through guided tours.  Admission to several nearby historic homes are included with admission to the Palace, as is admission to the 1809 New Bern Academy, which now houses exhibits about the history of New Bern.

Shoppers will enjoy downtown New Bern's many and diverse shops in a walkable, pleasant environment. 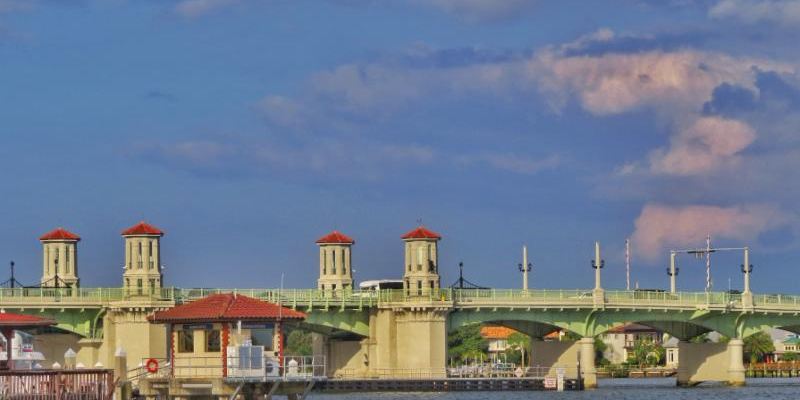 Starting in the resort area of Palm Coast, Florida, this tour covers some amazingly diverse bicycling -- from famous route A1A along the blue waters of the Atlantic to country roads providing scenic views of "Old Florida." 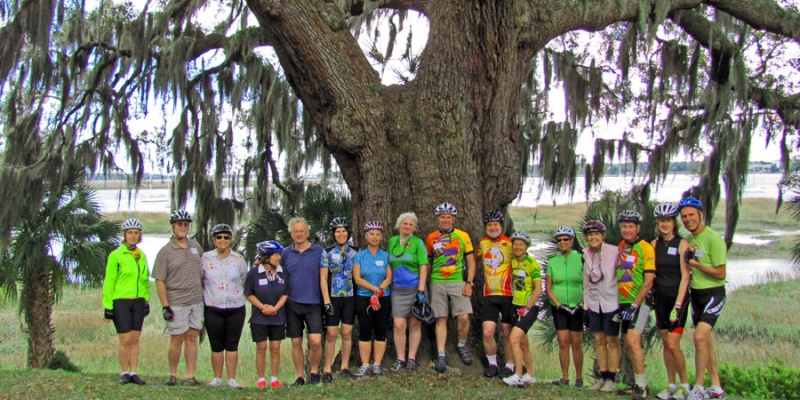 This tour packs the best of the South Carolina Low Country into a fabulous 6 day multi-sport vacation. Bike the idyllic islands of the South Carolina coast under stands of live oaks and wispy Spanish moss. Learn about the history of the Palmetto State's plantation past.  Walk the beaches and stroll past architectural treasures on the streets of Charleston and Beaufort, SC.

Get our Full Color Brochure